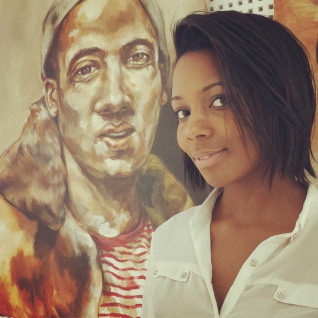 Born in Birmingham, Alabama- America's mecca for Civil Rights history, Ambrice Miller's work examines the cultural relations in modern America and explores different forms of self and projected identity. From a geographical perspective, Miller refers to Birmingham as the buckle of the "Southern Bible Belt," a term used to describe the religiously embedded culture of the American South. The combination of her personal experience as an African-American woman and her religious upbringing provides an infinite source of inspiration.

Miller attended the six year Visual Arts program at the Alabama School of Fine Arts (ASFA) to develop her technical skills of painting, drawing and printmaking.  It was during her studies at  ASFA that she began to find interest in the human form. Upon graduation from the ASFA she attended Davidson College in North Carolina studying for BFA as a Studio Arts major. At Davidson she was awarded the Romare Bearden Scholarship- a scholarship granted to a student who demonstrates a promise and a passion for the Arts.

During her senior year at Davidson College Miller began to explore the idea of "Christian Limitation," a term she later defined as humans’ inability to fully employ the religious teachings of their beliefs in a social context, specifically when interacting with ethnic and cultural minorities. This exploration of her personal relationship with religion and her experiences is the thesis of her current work.

In her work religious limitations and other conceptual limitations manifest themselves in a physical manner as she deconstructs the human form to mirror the breakdown of the human condition.  That is, the figures become  victims of their own assertions.

Currently, Miller lives and works in London, United Kingdom. She continues to explore themes surrounding the social implications of cultural differences across Europe, Asia and the Middle East.
UA-25569904